Given that over a period of several decades the civil rights of  somewhere between 3 to 5 million people on welfare have been violated by the Australian Federal Parliament, an unreported, “irrelevant”,  classified death toll of between 15,000 – 60,000 is relatively modest. This is especially so given that 1 in 5 Australians will suffer a mental health problem at some time in their lives and the highest percentage of people in this risk category are Centrelink clients. It is therefore very obvious that these people are very vulnerable to criminally reckless abuses of power by insensitive or  indifferent bureaucrats, or power-mad bureaucrats who are just plain ruthless in wielding their perceived powers.

At first glance the letter below seems to a routine, harmless letter from Centrelink but it is in fact both extremely dangerous and a breach of South Australia’s criminal laws. 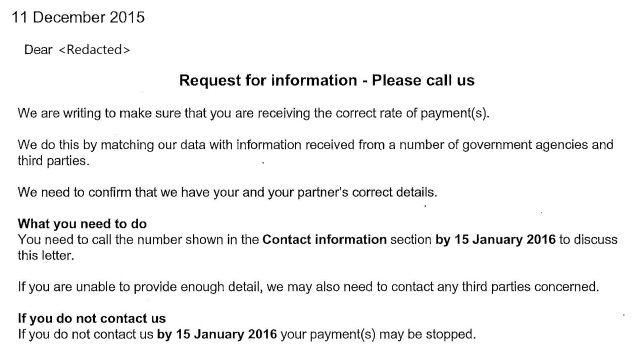 Notice the last line, i.e. “If you do not contact us by 15 January 2016 your payments may be stopped.” Such threats to turn off welfare payments are stock standard on just about every letter that Centrelink sends to welfare recipients and yet these statements are violations of criminal laws for several reasons, one of which is s 172 of South Australia’s Criminal Law Consolidation Act (1935) which is shown below:

(1)    A person who menaces another intending to get the other to submit to a demand is guilty of blackmail.

(b)    for an aggravated offence—imprisonment for 20 years.

As it clearly states in s 172 (2) above, The object of the demand is irrelevant.
THERFORE TAKE NOTE OF THIS “The person who makes the demand may be seeking to influence the performance of a public duty.”

That was a totally unreal, criminal abuse of power by Centrelink!

It is possible that the real reason for the call was so that if a welfare recipient under-reported their income, then Centrelink’s recording of this call could provide the evidence needed to sustain a criminal prosecution.

S 171 of the South Australian Criminal Law Consolidation Act is about defining what is “Blackmail” and within these definitions are points of law that every welfare recipient in South Australia (and every Centrelink staff member) needs to know. Pay particular attention to the points that I have underlined as they are points of law that underline just how Centrelink is blackmailing vulnerable people with its “Do as we say or we’ll cut of the dole” threat. To a rich person, being deprived of the dole is not a threat, but to a person who relies upon the dole for subsistence payments, i.e. to survive, any threat to cut of the dole is a real and tangible threat that has to be taken seriously because, despite the known, classified, death toll, Centrelink does this many thousands of times each year:

(a)    physical or mental harm (including humiliation or serious embarrassment); or

(b)    harm to a person’s property (including economic harm);

(a)    the threat is a threat of harm to the victim or a third person (to be inflicted by the person making the threat or someone else); and

(b)    the threat is unwarranted; and

(i)     the threat would be taken seriously by a reasonable person of normal stability and courage; or

(ii)     the victim in fact takes the threat seriously because of a particular vulnerability known to the person making the threat;

threat includes an implied threat but, unless the threat is a threat of violence, does not include a threat made in the course of, or incidentally to—

(a)    collective bargaining; or

(b)    negotiations to secure a political or industrial advantage;

(a)    the carrying out of the threat would (if it were carried out in the State) constitute a serious offence; or

(b)    the making of the threat is, in the circumstances in which it is made—

(i)     improper according to the standards of ordinary people; and

(ii)     known by the person making the threat to be improper according to the standards of ordinary people.

(2)    The question whether a defendant’s conduct was improper according to the standards of ordinary people is a question of fact to be decided according to the jury’s own knowledge and experience and not on the basis of evidence of those standards.

NOTE (2) above about a jury deciding if the threat was “improper” by their standards”. Part of the problem is that with Centrelink not reporting the death toll caused by breaching and unconstitutional debt recovery actions, most people do not realize that is a practice that violates legal and civil rights and in doing so, kills people.

If you are a welfare recipient, part of your “defence system” is to promote your rights and in order to do that, you have to know them, so here are some of the important rights that you need to know in order to survive in a toxic society that does not approve of “dole bludgers”.

CENTRELINK VIOLATIONS OF YOUR CIVIL RIGHTS

The statement “…your payments may be stopped” is a serious violation of a number of your civil rights under:

THE MINDSET OF MURDER.

When it comes to crimes that deal with what the Courts call “The mindset of Murder”, the simplest explanation of this was provided by an English Royal Commission in 1839, i.e. “It is the placing of life in peril that constitutes the crime.”

“His Honour distinguished wilful murder from reckless murder – understandably, those expressions were not used – by telling the jury, by way of modification of what might be called the usual definition of murder given to juries, that there were two different intents, either of which would, in conjunction with the other elements of the crime, constitute the crime of murder. The first was the intent either to kill or to do really serious injury and the second was the knowledge that it was probable that death or really serious injury would result from the act done.”

The power  within Centrelink’s “cut of your payments” threat is that the target of the threat faces being left totally destitute with no means to survive! That is a very dangerous threat and, given the number of times it has been carried and the serious economic “injury” or economic “harm” caused, it is a dangerous threat that is totally at odds with the Commonwealth’s international human rights obligations.

Anyone care to explain that?

It is also a very dangerous threat because Centrelink does not monitor the harm caused by the implementation of this threat, as the 2 following examples reveal:

The following text comes from page 38 of the Hansard Minutes for the Community Affairs Legislation Committee (the CALC) on 26th February 2015:

Ms Campbell: We do not capture that information.

From the real-world human impact end of these unconstitutional, human rights violating welfare penalties is a “Willful Intent” to violate the rights of welfare recipients with an very obvious “We don’t don’t care two hoots about our obligations and the consequences of our actions” attitude that is probably a violation of the Mindset of Murder “reckless indifference” principle, a fact made even more obvious by the letter below:

EXAMPLE NUMBER 2 – The infamous “Centrelink does not collect…” letter. 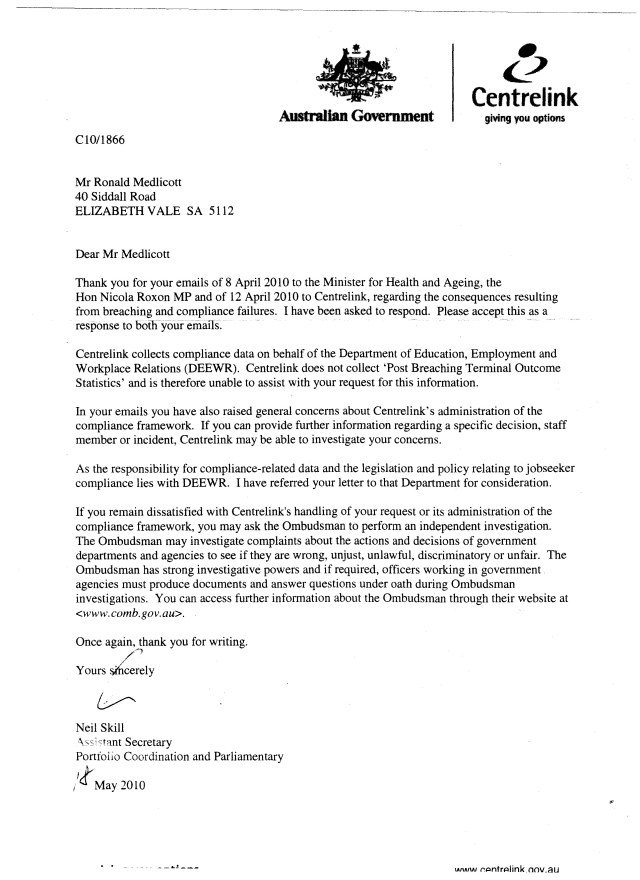 This letter, written just 3 months after the last of the 4 Home Improvement program fatalities, is indisputible, irrefutable  documentary evidence that  Centrelink does not care whether impoverished welfare recipients live or die when they are unconstitutionally deprived of what may be their only means of surviving and so I repeat what stated in example #1:

A FACT OF LAW: ANY CENTRELINK LETTER THAT THREATENS TO CUT OF WELFARE PAYMENTS IS VIOLATING BOTH CRIMINAL LAWS AND YOUR CIVIL RIGHTS.

In case you did not quite get that point, here it is again in smaller chunks:

When dealing with Centrelink bureaucrats who may believe that if Centrelink does it, then it must be OKAY, you need to read the last posting.

How do you deal with such pig-headed stubbornness? Do as I do, file a complaint and demand that Centrelink respect your rights.

If you live in another state or territory, GOOGLE your state’s crimes act and download it. Look for words such as:

Know your rights and when Centrelink or a job search assistance ‘case manager’ violates those rights, demand an explanation and if you are not happy, file a complaint, although you need to be aware that this can also be an exercise in futility as my next posting will reveal.

Think about this statement which was made by Francis Neale, co-chair of the International Bar Association’s Rule of Law Action Group  in July 2009

“All countries, even those governed by the crudest dictatorship, need or have laws, although they disregard the individual or collective rights of all or parts of the population. Indeed, apartheid was enforced with meticulous attention to form and detail.”

Apartheid in South Africa and Breaching  in Australia are 2 sides of the same coin, i.e. they are both Crimes against Humanity. The only difference is whilst apartheid has been (offically)  abolished in South Africa, its conjoined twin, Breaching, is flourishing in Australia.

Ronald Medlicott – A Christian advocate for  Justice in Australia.