This posting is an on-line submission to the Office of the Prosecutor of the International Criminal Court concerning my complaint, OTP CR-188/19, and the relevance of a 1932 House of Lords “Good neighbour” decision that I believe should be considered when assessing the legal merit of this complaint against the Australian Federal Parliament.

No-one in the OTP, or anyone else who reads this posting, should be in any doubt that I am accusing the Australian Parliament of engaging in Crimes against Humanity on a sophisticated holocaust scale. 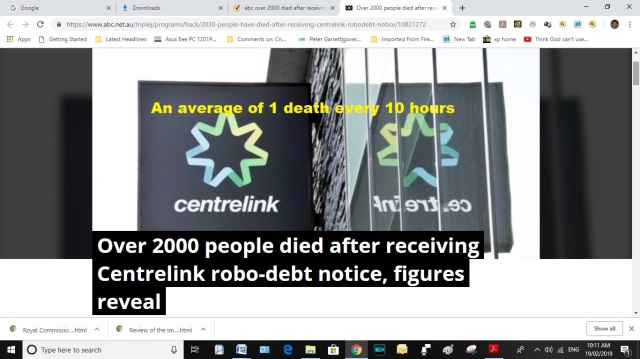 One of my allegations is that in the 753 day period between 1st July 2016 and the 31st October 2018, the federal government of Australia misled some 900,000 people and knowingly defrauded over 400,000 of these people of a reported $2.9 Billion. I further allege that in the commission of this criminal activity, that the Australian federal government may have caused the wrongful deaths of as many as 2,030 people, as per the Triple J Hack internet report that was published on 18th February 2019.

In addition, I allege that the above criminal activity is merely the proverbial ‘tip-of-the-iceberg’.

On 20th February 2017, Senator George Brandis made the following statements during the broadcast of an Australian Broadcasting Commission program, #Qand A. 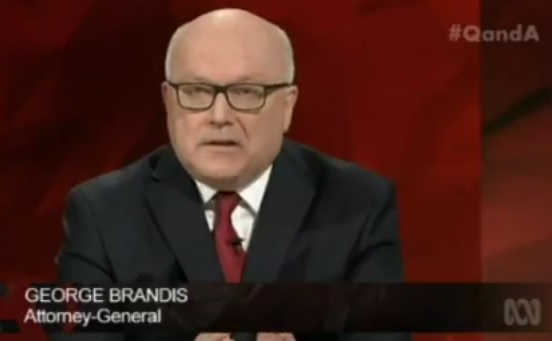 “Now, this system involves a review of potentially millions of transfer payments, so of course there will be mistakes made, and I agree with what Piers Ackermann said, that when mistakes are made and they have terrible human consequences, then off course that’s a tragedy. But we do have to have appropriate compliance measures and the idea of data matching, introduced by Hawke and the idea of automated letters being sent to people when there is a discrepancy evident from the data-matching between the ATO data and the Centrelink data; it was introduced by you, is not a bad system. The methodology that has been used by this government is the same methodology that we inherited from you.”

In this statement, Senator Brandis admitted that Centrelink “mistakes” randomly killed innocent people that were justified on the basis of the need for what he described as “appropriate compliance measures.”

The following comments should also be noted:

This was not a ‘flash-in-the-pan’ policy that randomly killed innocent people. It was a long-term practice that has been violating the civil rights of vulnerable people for decades.

I make that definitive statement because, in ASIC v. Hellicar, the Australian High Court ruled that once a regulator’s decision, which has pecuniary implications, is challenged, the determination of the facts becomes a matter for the courts and not the regulators who made the original decision.

I would make the point that the assumption that a data mismatch between 2 government computer systems that use totally different algorithms for calculating gross annual income earned is also not reasonable grounds for assigning legal liability for mismatches between these government computer networks.

The ability of Australian federal politicians, over a timeframe measured in decades, to enact laws that ruthlessly menace, intimidate, defraud,recklessly endanger and also randomly kill people is not the same as the right to do so. It is a fact of law that national parliaments have a duty of care not to engage in activities that foreseeably cause serious or fatal harm,  a fact of law made quite clear in a House of Lords determination in 1932.

The leading decision was presented by Lord Atkin, with 2 other judges supporting the lead decisions and 2 judges opposing, i.e. a 3:2 decision, with the majority decision prevailing. The following citations are from the Donoghue v. Stevenson majority decision:

The rule that you are to love your neighbour becomes in law, you must not injure your neighbour; and the lawyer’s question, Who is my neighbour? receives a restricted reply. You must take reasonable care to avoid acts or omissions which you can reasonably foresee would be likely to injure your neighbour. Who, then, in law is my neighbour? The answer seems to be – persons who are so closely and directly affected by my act that I ought reasonably to have them in contemplation as being so affected when I am directing my mind to the acts or omissions which are called in question.

I have no hesitation in affirming that a person, who for gain engages in the business of manufacturing articles of food and drink intended for consumption by members of the public in the form in which he issues them, is under a duty to take care in the manufacture of these articles.

That duty, in my opinion, he owes to those whom he intends to consume his products. He manufactures his commodities for human consumption; he intends and contemplates that they shall be consumed. By reason of that very fact, he places himself in a relationship with all the potential consumers of his commodities, and that relationship, which he assumes and desires for his own ends, imposes upon him a duty to take care to avoid injuring them.

The respondent, in placing his manufactured article of drink upon the market, has intentionally so excluded interference with, or examination of, the article by any intermediate handler of the goods between himself and the consumer that he has, of his own accord, brought himself into direct relationship with the consumer, with the result that the consumer is entitled to rely upon the exercise of diligence by the manufacturer to secure that the article shall not be harmful to the consumer.

I conclude this posting with a bullet-pointed presentation of Commissioner Ian Hanger’s statement in 14.7.3.2 of the 2014 Report of the Royal Commission into the Home Improvement Program:

Every one of the 2,030 deaths that is linked to the foreseeably dangerous, fraudulent Robo Debt claims, needs to be explained, not to the media or the Australian parliament but to a court of law.

The entire Australian criminal justice system, from the High Court down to police officers in a shop front police station, have all abrogated responsibility for the foreseeably dangerous, randomly fatal consequences of decades of ideology driven, unconstitutional, welfare policies and practices, the International Criminal Court is literally the Court of Last Resort when it comes to accountability for the persections of millions of vulnerable people and an as yet uncounted death toll that is likely to now exceed 100,000.