Robo-Debt Victory? With over 2,000 dead, can anyone claim victory for defeating the murderous Robo-Debt Mark 2 fraud?

Like scurrilous thieves in the night, Scott Morrison and his government are trying to sneak away from the Robo-Debt Mark 2 Massacre of over 2,000 welfare recipients.

This begs the question, can anyone claim victory for halting a politically driven humanitarian disaster which has resulted in:

Over 1 million people were the victims of the crime of “Unwarranted Demands“, i.e. the deliberate violation of Section 139.2 of the Commonwealth criminal Code?

139.2 Unwarranted demands made by a Commonwealth public official.

When it comes to “obtaining a gain; or causing a loss”:

(2) In subsection (1):
causes serious bodily or mental harm includes, but is not restricted to, commits acts of torture, rape, sexual violence or inhuman or degrading treatment.

(2) In subsection (1):
conditions of life includes, but is not restricted to, intentional deprivation of resources indispensable for survival, such as deprivation of food or medical services, or systematic expulsion from homes.

NOTE: The Scott Morrison “Tough Stand On Dole” news article and the 2,696,196 Newstart Suspensions that are mentioned in the above news articles are, in law, compelling evidence of the scale with which the Morrison Government has been deliberately violating Sections 268.3, 268.4 and 268.5 of the Commonwealth Criminal Code Act.

Is it any wonder that suicide amongst welfare recipients has sky-rocketed?

More than 120,000 welfare recipients who had their payments suspended last financial year were later found by their job agency to have had a valid reason for not meeting their obligations, according to data obtained by Guardian Australia.

The figures suggest the Jobactive provider of about one in five people who were temporarily cut from income support accepted that they had a reasonable excuse for missing an appointment or compulsory activity.

It comes amid a debate about the rate of Newstart and after Channel Seven’s Sunrise program sparked outrage last week over a “dole bludger” segment which cited reports saying 78% of people had their payments suspended. 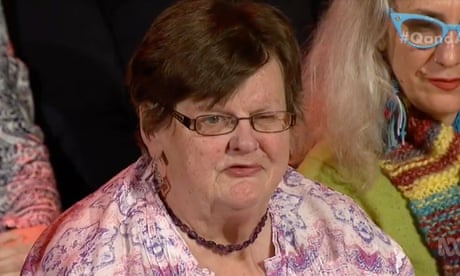 Newstart recipient on Q&A: ‘How would you suggest people like me have a go?’

The data showed that of the 744,884 participants on the flagship welfare-to-work scheme last financial year, 581,866 had their payments suspended for failing to meet their mutual obligations.

The Daily Telegraph story was later cited by the employment minister, Michaelia Cash, as evidence the government’s new compliance regime was working.

What that data shows is that the Morrison Government has been violating the civil rights of welfare recipients literally thousands of times a day.

In 1946, the people of Australia changed the Australian Constitution and, in Section 51(xxiiiA)  placed an obligation upon the Federal parliament FOR THE PROVISION of welfare allowances, that could not be linked to compulsory “civil conscription” activities, e.g. Work for the Dole or other compulsory “education” activities.

THE WORLD IS TAKING NOTICE

There is a grave risk the Morrison Government is “stumbling zombie-like into a digital welfare dystopia” if serious changes aren’t made to Australia’s social security system, the United Nations expert on poverty has warned.

Philip Alston, the Special Rapporteur on extreme poverty and human rights, will tomorrow present a report that calls out Australia and warns that developments in technology should not come at the cost of human rights.

“The Morrison Government is designing a social security system that is focussed on punishment and automation, rather than dignity and humanity. Advances in technology have the power to do enormous good, but for that to happen, ending inequality must be central to their design. People’s rights and wellbeing cannot be the price we pay,” said Hurley

TO FIND THE UNITED NATIONS REPORT

go to the URL below which links to this Unityed Nations Human Rights Commission web page and click on the “new report” text (in red in this picture but blue when you load it.) https://www.ohchr.org/en/issues/poverty/pages/srextremepovertyindex.aspx

PARAGRAPH 23: Welfare benefit calculation and payments.The calculation and payment of benefits is increasingly done using digital technologies without the involvement of caseworkers and other human decision makers. While such systems offer many potential advantages, the Special Rapporteur also received information about prominent examples of system errors or failures that had generated major problems for large numbers of beneficiaries. These included the automated debt-raising and recovery system (“robo-debt”) in Australia, the Real Time Information system in the United Kingdom and the Social Assistance Management System in Canada.

Death toll in the wake of robo-debt introduction

According to recently to reported data, more than 2000 people died after receiving a robo-debt notice between July 2016 to October 2018.

While no cause for death has been recorded, almost a third, 663 people – were classified as “vulnerable”, which means they had complex needs like mental illness, drug use or were victims of domestic violence.

It’s difficult not to believe that there may be a significant link between these deaths and alleged debts owed to Centrelink.

Behind the fancy title is the simple fact that Dr. Terry Carney, a former Professor of Law at the University of New South Wales , believes that Robo-Debt is EXTORTION.

The longest-serving member of Australia’s government review tribunal has offered a withering assessment of the Department of Human Services’ automated debt recovery program, describing it as a form of extortion.

Terry Carney served as a member of the Administrative Appeals Tribunal’s social security division for 39 years until his term ended in September 2017.

As part of his work he heard some of the first cases about the Federal Government’s online compliance initiative, dubbed the “robo-debt” scheme by some.

Since leaving his position he has become an outspoken critic of the scheme.

Photo: Terry Carney, a former member of the Administrative Appeals Tribunal, has become an outspoken critic of the robo-debt scheme. (ABC News)

Mr Carney told 7.30 that Centrelink repeatedly refused to offer any clear legal defence of the program. “The [Human Services] Department’s conduct is abysmal,” he said. “It’s the conduct that you would expect [from] a tinpot, third-world country. At no stage does Centrelink ever seek to defend the unlawful basis on which it’s raising those debts.”

THE STATUTE OF LIMITATIONS ON OVER-PAYMENTS

Under Section 1,237A of the Social Security Act (1991), the Statute of Limitations for the recovery of Commonwealth error overpayments is:

All, repeat ALL, contested decisions MUST be referred to a court for an impartial determination of the facts.

This means that the moment a welfare recipient disputes a Centrelink decision, the issue MUST, repeat MUST, be decided by a court.

However, knowing this, Scott Morrison and his government, along with Centrelink officials, have, like previous governments, simply ignored this binding obligation.

As per the High Court’s decision in Immigration Minister versus Bhardwaj [HCA 11, 14th march 2002], any decision not based upon a court determination is, in law, no decision at all, i.e. it is a fraudulent decision.

This means that Robo-debt triggered deaths, even suicides, are culpable homicides. [As in murder.]

NOTE TO READERS: If you know of any person who has been ripped off by Centrelink, please have them watch this video: